Mission Side Of Driving Schools And Educational Aircraft


Do you remember the mission where CJ and Cesar a forum steal cars and then racing with Cesar? Or mission where CJ pursuit of an aircraft that was taking off until finally dropping a bomb with a remote? For me the two missions are one of the missions are impressive, especially considering the process leading to the mission, which should be finished driving school and flight school in advance. I think is a mistake made Rockstar where there is no similar missions in GTA 5. 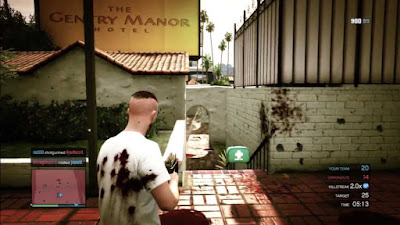 If you modify a car in GTA 5, you will not find there nitro. Whereas nitro is something impressive to be installed in the car. For those of you who have long played GTA would also know how solid a nitro car use. Watch mission Test on Youtube, to see again how great a car with nitro.


Restaurants and Bars
If you notice, there is very much at all restaurants in the GTA 5. Unfortunately, the restaurant is just a mere display. You can not log into it and eat foods that are sold there, the way you do in GTA San Andreas. In fact, it would be very interesting if we can get in and eat direstoran in GTA 5, especially if it can do mischief therein.

I am very happy to know that there is someone who can replace the figure of a CJ in GTA 5. Starting from the physical to the neighborhood, namely Franklin. Franklin was black and lived in Grove Street is a Gangstar environment. However, I was disappointed because there was no gang war mission like the one in GTA San Andreas. If there were, would be very cool, especially considering the quality of gameplay in GTA 5 is quite remarkable.

The quality of weapons in GTA 5 has undergone many improvements, but there is one thing that is unfortunate. Is that? Namely the lack of skill ability to use two weapons or so-called 'Hitman' like in GTA San Andreas. You can imagine how cool Michael if using two pistols when faced with an opponent in front of him.

That's some interesting stuff in GTA San Andreas which was not contained in GTA 5. It is unfortunate indeed. I myself as a fan of GTA was very disappointed with this. So back to the original question.

GTA 5 vs GTA San Andreas: Which is best?

Perhaps you will wonder. Why is that?

The reason is, so many interesting things in GTA San Andreas is actually not in GTA 5. Like buying a house, jetpack, gang war, and many more. Plus mission very interesting story with a very large number, that 104 missions. It was very very disappointing. Where GTA 5 that has 3 characters actually only has 69 missions.
at 6:40 PM